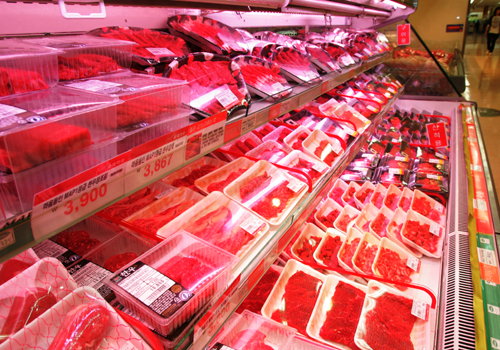 As of right now, U.S. beef is being sold in South Korea. After the ‘US beef announcement’ went into effect, E-mart started taking heat from netizens for advertising the controversial meat.

According to the site, Daum Agora, one netizen wrote an article on July 1st that says one of the E-mart branches in Daegu is selling U.S. LA-style beef ribs. After the article was posted, people have been arguing whether it is true or not.

Starting with the headline saying, “U.S. LA beef ribs are being sold in Daegu E-marts,” the author of the Daum article states that, “When I went to the E-mart in Siji, I could see they are selling U.S. LA galbi.”

In regards to this article, an official of E-mart explained that, “E-mart is not selling U.S. beef at all, and this article clearly contains wrong information.”

Additionally, an official from E-mart’s Siji branch retorted, “How can we sell U.S. beef while people in South Korea have totally negative feelings toward it?” and said, “We sell products that are bulk purchased from the headquarters of E-mart, which means it totally does not make sense that only the Siji branch sells U.S. beef.”

It is assumed that the false Daum article is stemming from people’s confusion about ‘LA styled Australian beef ribs’ which are being sold at E-mart now.

However, the term ‘LA’ is actually an abbreviated word of ‘Lateral’ since LA Galbi is produced by cutting the lateral part of beef ribs. Therefore, the accurate term for ‘LA galbi’ should be worded ‘LA-styled galbi’.

In addition to the fake ‘LA Galbi’ article, E-mart has been struggling to seek some solutions to several fake articles posted on ‘Daum Agora,’ such as, “E-mart’s Yeouido branch stops selling products from Samyang Ramyun Company” and “E-mart is going to give promotion penalties to the employees who participate in Candlelight rally.”